Police Parade 14 Over Invasion On Justice Odili’s Residence, Say They Were Not Security Operatives

by THELAWYER.NG
in Law Enforcement
0 0
0

The Police High Command on Thursday paraded 14 suspects over the invasion of the Abuja residence of a Supreme Court Justice, Mary Odili, describing them as impostors who were unknown to any of the nation’s security forces.

Parading the suspects at the Force Headquarters Annex, Abuja, the Force Spokesman, Frank Mba, said that the 14 suspects and Seven others now at large conspired to raid the residence following information that the Supreme Court Justice was keeping a large sum of money in foreign currencies.

The men were said to have been led by a fake Chief Superintendent of Police, Lawrence Ajojo, who admitted that he was engaged as a consultant by the Attorney-General of the Federation and Minister of Justice, Abubakar Malami, SAN. 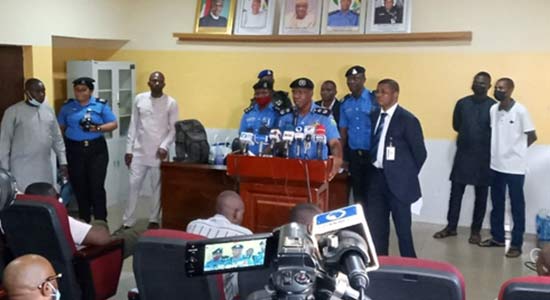 Ajojo told journalists that he was not a police officer, adding that he was a consultant to the AGF.

“I am not an officer of the Nigeria Police but a consultant for the AGF; he did not send us to raid Mrs Odili’s house,” he stated.

A complement of security operatives had stormed Justice Odili’s Maitama residence on the strength of a purported tip by a whistleblower, Aliyu Umar, who claimed to have observed suspicious activities at the Supreme Court Justice’s residence.

Mba noted that the leader of the illegal operation is a fake Chief Superintendent of police.

He said the criminals are loose canons and document forgers who were on their own and not hired by any personnel of the ministry of justice.

One Stanley Nkwazeme, a journalist was also part of the syndicates arrested.

The arrest is the latest in a series of events since some armed men laid siege on Justice Odili’s apartment in Maitama.

However, the Police commended the resistance put up by the security personnel attached to Odili’s residence for not allowing the suspects access to the building on the day of the incident, saying that it could been greatest embarrassment to the nation before the International community if the operation had succeeded.

Following an order by Chief Magistrate Emmanuel Iyanna, who approved the search warrant by a body identified as the Joint Panel Recovery unit in the Ministry of Justice, on October 29, 2021, the security operatives besieged Odili’s home but they were reportedly resisted.

The magistrate later revoked the order, saying he was misled.

The incident sparked an outrage with the Attorney-General of the Federation and Minister of Justice, Abubakar Malami, SAN, absolving his office of involvement in the operation.

The police leadership also said it was not aware of the raid.

The incident drew criticisms from many quarters including the Nigerian Bar Association (NBA), Governor Nyesom Wike of Rivers State, and human rights lawyer, Femi Falana, among others.

Wike had given the Federal Government a 48-hour ultimatum to get the perpetrators and claimed that the incident was an assassination attempt.

“We think that there is an attempt to assassinate Justice Mary Odili, the husband and members of the family, there are no two ways about it. If they had succeeded, all the Federal Government would have told us (is that) we will get to the bottom of the matter because that has always been the normal language,” Wike said during a press conference in Abuja on October 31.

“The issue here has nothing to do with the Attorney General, we are happy he said he is not aware. We said, okay since you are not aware, we are giving you 48 hours to tell us who is responsible.”

The NBA had also called on the Federal Government to set up a panel to probe the siege, describing it as an assault on the judiciary.

“The grave implications of this possibility leave a lot to be desired,” the president of the NBA, Olumide Akpata, said in a statement.

“When viewed in the context of a similar raid on the premises of Supreme Court Justices in 2016, the rationale of which was never fully explained or indeed justified, the NBA interprets last night’s incident as a part of an orchestrated affront on the judiciary, designed to intimidate and ridicule the judiciary.”

The Nigeria Police Force has arrested a total of fourteen (14) suspects including the principal suspect – a fake Chief Superintendent of Police (CSP) – for complicity in the failed criminal trespass on the Abuja residence of Justice Mary Odili on Friday, 29th October, 2021. The suspects were arrested following investigations conducted by detectives from the Force Intelligence Bureau (FIB) which clearly revealed the criminal involvement and individual roles the suspects played in the invasion of the residence of the revered Supreme Court Judge. Recall that the Inspector General of Police, IGP Usman Alkali Baba, psc (+), NPM, fdc, on 1st November, 2021, affirmed that the Force did not authorize security operatives to carry out any assignment in or around the residence of Justice Mary Odili and directed the Force Intelligence Bureau (FIB) to carry out a discrete investigation with the aim of bringing the perpetrators to book.

The facts of the case from Police Investigations have it that one Aliyu Umar Ibrahim, an acclaimed whistle blower, following a baseless and unverified information he got from one Yusuf Adamu – parading himself as the godson of Chief Peter Odili – that there is a huge sum of money in foreign currencies starched in the residence of Her Lordship, Justice Mary Odili located at No. 7, Imo River Street, Maitama, initiated processes aimed at illegally recovering the said money. Consequently, the syndicate contacted one Bashir Musa, a clerical staff of the Central Bank of Nigeria (CBN), who in turn sought the assistance of two (2) others – Shehu Jibo and Abdullahi Adamu.

The whistle blower was later introduced to one Bayero Lawal who falsely presented himself as a Director in EFCC. He took the whistle blower to one Hajiya Maimuna Maishanu who in-turn took them to her cousin, Michael Diete-Spiff, who claimed to be the Director of Foreign Currency Operation of Ghost’s Account for Local Whistle Blowers & Assets Recovery Panel, purportedly operating under the Federal Ministry of Justice – an agency that in fact does not exist. Diete-Spiff later introduced the whistle blower to one Lawrence Ajodo with the aid of one Godwin (currently at large). From this moment, Lawrence Ajodo – who falsely claimed to be a Chief Superintendent of Police (CSP) and also the officer in-charge of a non-existing Asset Recovery Panel at the Federal Ministry of Justice took over the planning and execution of the illicit operation. Through the assistance of one Ayodele Akindipe, an herbalist, the fake CSP procured the services of an Assistant Superintendent of Police and two (2) Soldiers for the failed operation. The fake CSP also elicited the services of a journalist, one Stanley Nkwazema and two (2) lawyers namely Bar. Alex Onyekuru and Bar. Igwe Ernest. While the journalist was expected to play the blackmail role, the lawyers were expected to help the syndicate in perfecting court documents and processes. The fake CSP later deposed to an affidavit and eventually obtained a search warrant meant for the execution of the raid.

Investigations so far conducted by the Police show that the suspects criminally trespassed on the residence of Her Lordship but were not allowed to execute the search warrant due to the lawful resistance from Police officers on guard duty at her residence. Police findings also revealed that the principal suspect – Lawrence Ajodo – is an impostor and not a police officer as he falsely claimed. Similarly, the Ghost’s Account for Local Whistle Blowers & Assets Tax Recovery Panel purportedly operating under the Federal Ministry of Justice does not exist at the Federal Ministry of Justice neither is it registered with the Corporate Affairs Commission. Also, the signature of the Honourable Minister of Justice and Attorney General of the Federation, Abubakar Malami (SAN) on the ID card presented by the fake CSP during the raid was forged. The Search Warrant which the suspects procured from a Magistrate Court for purposes of searching the premises of Justice Odili, was also obtained under false representation. The entire criminal operation has no authorization of any known Security Agency or Federal Government Ministry/Department.

Three (3) vehicles used by the suspects for the illegal invasion and a laptop computer, printer and flash drive used for the production of the fake ID cards were recovered from the suspects by the Police investigators.

Meanwhile, investigation is being intensified to arrest the other seven (7) suspects including two (2) persons believed to be personnel of the Nigeria Army who were physically present during the raid, and fully dressed in Army uniform.

The IGP, while assuring diligent prosecution of the suspects, reiterated the commitment of the Force to continue to advance the rule of law and combatting all forms of crimes and criminality in the country.