by THELAWYER.NG
in Judiciary News
0 0
0

Disturbed by the state of affairs of the country, Justice Mary Peter-Odili of the Supreme Court, on Thursday, joined in the call for the restructuring of the country.

Justice Odili spoke in Abuja during a valedictory court session held in her honour by the Supreme Court, as she bowed out of the nation’s judiciary on Thursday, after attaining the mandatory retirement age of 70 years.

She said the issue of restructuring of the country had been resonating for sometime and that even though she cannot say much on the issue, her concerns stemmed from the fact that some of the people harping on it are very serious men with acuity of intellect, accompanied by their respective track records.

According to the retiring justice of the apex court: “The issue should be given an immediate attention lest we ignore the matter at the risk of a lost opportunity to set the ship of state on the right course.”

Justice Odili also posited that a person’s state can be gauged by the number of years he has lived in a given place instead of the locality of births of parents.

“The follow-up on this matter of state of origin or residency and the import thereto have thrown up the fact that the women have seen themselves taking the short end of the stick on account of marriage outside the state of their birth.

“These are matters that need urgent attention in our journey of nationhood and building and sustaining thereof,” Justice Odili added

In his speech, the Attorney General of the Federation (AGF) and Minister of Justice, Abubakar Makami (SAN), said the executive arm of government would work with the judiciary for critical reforms that would  facilitate speedy trials and enhance confidence in the Justice sector of the country.

Malami reiterated the commitment of President Muhammadu Buhari’s administration to respecting the dignity and independence of the judiciary as well as promoting harmonious relationship between the executive and the judiciary.

He also urged the judiciary to adopt innovation in technology to ensure a more effective and efficient justice delivery system for the benefit of the all Nigerians. 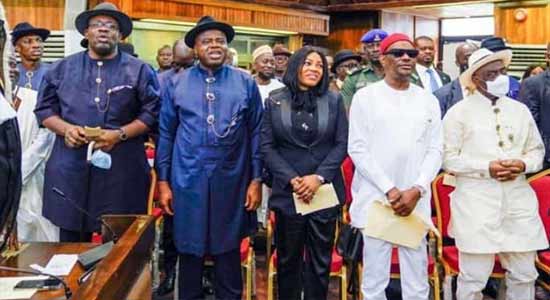 While commending the judiciary for its role in enthroning a virile, dynamic and democratic culture in the country, Malami also applauded the apex court for its landmark judgments which have contributed to strengthening and sustaining the democracy of the country.

In his speech, the Chief Justice of Nigeria (CJN), Justice Ibrahim Tanko Muhammad, showered encomiums on the retired justice, describing her as an epitome of jurisprudential finesse, an insuperable lioness with an irrepressible voice in the temple of Justice.

The CJN said Justice Odili has entered the revered history books of the country’s judiciary as the third woman to rise up to the apex court of the land and held sway in the discharge of her judicial functions.

Buhari Off To Abu Dhabi For Two-Day Visit