Following series of threats by some Islamic extremists on his social media handles, former Vice President Atiku Abubakar, late last night deleted his condemnation of the murder of Deborah Samuel.

The deceased, a 200-level student of the Department of Home Economics, Shehu Shagari College of Education, Sokoto, was yesterday killed by an angry mob for allegedly blaspheming Prophet Muhammad.

Atiku had after the incidence which has continued to receive global condemnation, written: “There cannot be a justification for such gruesome murder. Deborah Yakubu was murdered, and all those behind her death must be brought to justice. My condolences to her family and friends.”

But storming his Facebook and Twitter pages, the extremists, mostly from the northern parts of the country, threatened not to vote for him in the forthcoming 2023 elections.

Warning him to jettison his condemnation of the cold-blooded murder, they also promised to mobilise against him.

While he did not engage them, he first deleted the post he made on Facebook and about an hour later, he also deleted that of Twitter. 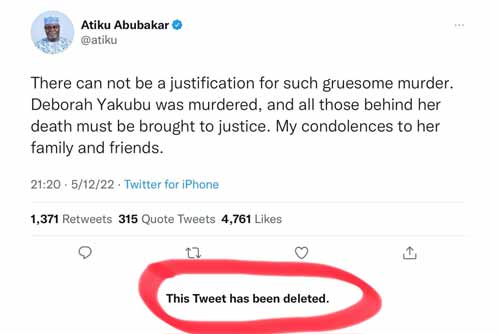 The former vice president’s actions have since earned him the derision of most Nigerians, who accused him of always chickening out when the going gets tough, an action they termed ‘unpresidential’.

According to a source, who spoke on condition of anonymity, trouble started when there was heated argument on the departmental WhatsApp page between the deceased and her colleagues.

The arguments drew the attention of angry mob who stoned the lady and set her body ablaze.