Less than 24 hours to the trial of Indigenous People of Biafra, IPOB, leader, Nnamdi Kanu, the Federal High Court has accredited just 10 journalists to cover the event.

A copy of the circular signed by the Chief Information Officer, Catherine Oby Christopher sighted by Juris Digest

Those accredited include Daily Post, Premium Times, Thisday, The Nation, The Herald, and Daily Independent newspapers while the Nigerian Television Authority (NTA) is leading the broadcast side. 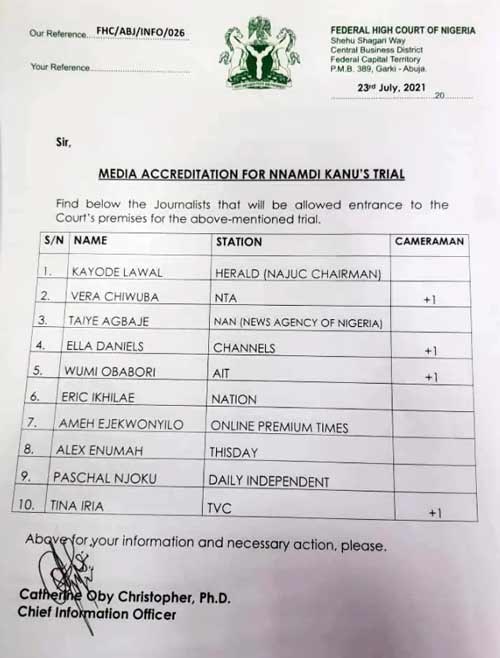 Kanu, who was re-arrested in controversial circumstances in faraway Kenya, will be facing charges bordering on terrorism, treasonable felony, illegal possession of arms, among others, before Justice Binta Nyako of the Federal High Court in Abuja.

Recent Controversy On VAT Collection: The Need To Adopt Fiscal Federalism And Restructuring

Train Your Legal Assistants at The Institute of Paralegal Studies (IOPS)